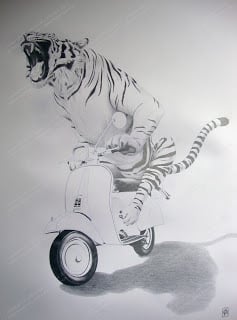 Ever since the exhibition completed and there was interest to do another show sometime in the future, several ideas have popped into my head. So much so, that there are enough images in total to cover five whole series of Animal Behaviour. these basically entail ten images in each series, which then go into a book.
One of the latest images that has been completed to pencil render stage is the tiger image, who sits on top of a vintage vespa. The notion being is that these small little machines who have little to no power to talk of can inspire the power of passion in their drivers. The tiger being a greatly powerful creature, who’s roar is akin to the sound of the most fearsome of motorcycles.
This will be completed before Christmas and on sale, and ready for the next exhibition shortly!!