Amy Winehouse didn’t really cause too much issue in the building of the design. If you look in the WIP, you will see there was two versions that was discussed with the client. The need was to have her looking as agressive as possible to give the idea that she was really desparate to get the microphone back. So the pose was adjusted to give more force to her stance. The baby was altered and then had the carriage lift slightly from the floor. 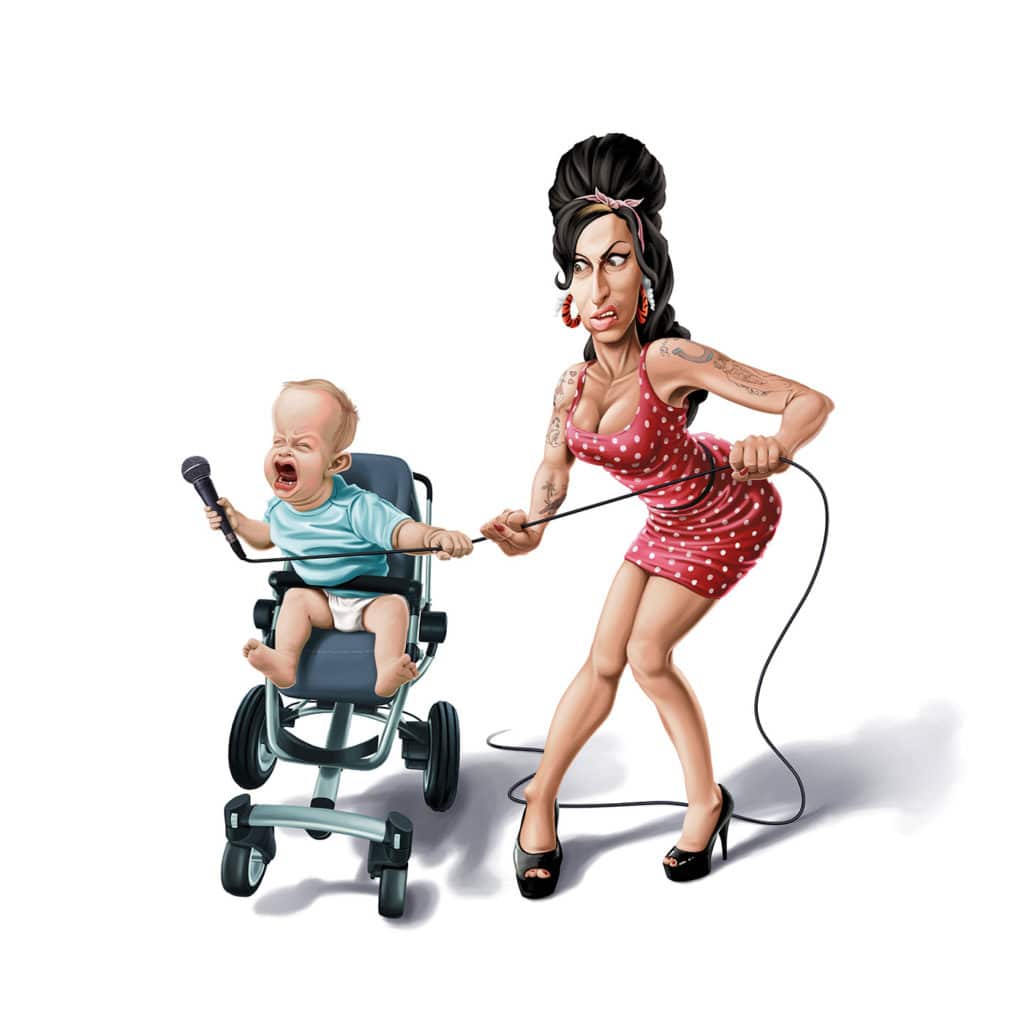 After the Elke caricature it was now a common practice in the method by which I developed these images. A very simple process of doing the pencil sketch as a guide, building the image son layers, and sampling the colours via found images on the web. Amy has a characteristic look and pose that makes it easy to turn a female figure into her. The hair is a feature that needed to be included, as her bee-hive is one of her calling cards. Apart from that her ethnicity creates certain facial features which were exploited, and using reference images the face was achieved relatively quickly. The second pencil drawing put her in the final pose, and due to the fact that it’s not possible to find reference images of her in these awkward poses, then I employed the help of my daughter to get the hand shots just right.
The colourisation of the piece was quite easy, and I noted that it should take about 3-4 days to do all the painting. This threw me after the second day, when I realised the complexity of the tattooes that she has on both arms. Luckily I found a clever way to emulate these and it all came together in the same timescale I had predicted. The dress although not exactly the same as Amy‘s red dress, is typical of the type of clothes and the addition of the polkadots enhanced that ‘Amy‘ feel.
The baby was literally designed by me, and although a few reference images were used, again, it was hard to find one in that pose, so I constructed it best I could using the references. As for the pram, this was in fact a 3d model that was used from Google Sketchup and simply posed in the right angle and exported out as a graphic for use in the composition.

The process of drawing Amy‘s face and body took two different paths. The head was relatively easy, and was done using the image seen in the Reference photos (to the right). The expression changed, which was done by doing the classic animator’s trick of looking in a mirror to understand the necessary changes.
The body was constructed out of several images, which also include non-Amy one’s for the extreme postures. Though her general shape was taken from as many photos as possible, along with the detailing of the tattooes and the dress, as seen here.

Detailing Amy was based on a combination of several researched reference images. It wasn’t possible to find an image of her the way I wanted, so it was important to find several shots so I could combine the lighting, and needed colours. I did find a magazine cover that showed this well known dress, so sampled the polka dots from there. As I build the project up I tend to section the areas off. This allows for error recovery. In case I make a painting fault only certain layers are affected. The head alone, as seen in the palette image takes seven layers.

Overall, the most complex part was tracing out Amy‘s tattoos and getting them to wrap around the arms in the best way, but over all I think it all worked out well.