In mid September, 2014 Cyclades Microbrewery at Tinos island,  a small island brewery on Tinos Island in the Cyclades,  producing craft  beer under the brand name “NISSOS beer“, contacted me regarding an illustration commission. In the early stages, the project was about an illustration for a beer label. To be achieved in my photo realistic style (found by the client through my animal artworks). After some discussion with the owner, it was suggested and agreed to make an illustration that could serve two eventual purposes; the label itself, but also as an illustrative piece for advertising purposes; and later a suggestion that the artwork itself could be sold as a print, to gain awareness of the brewery. 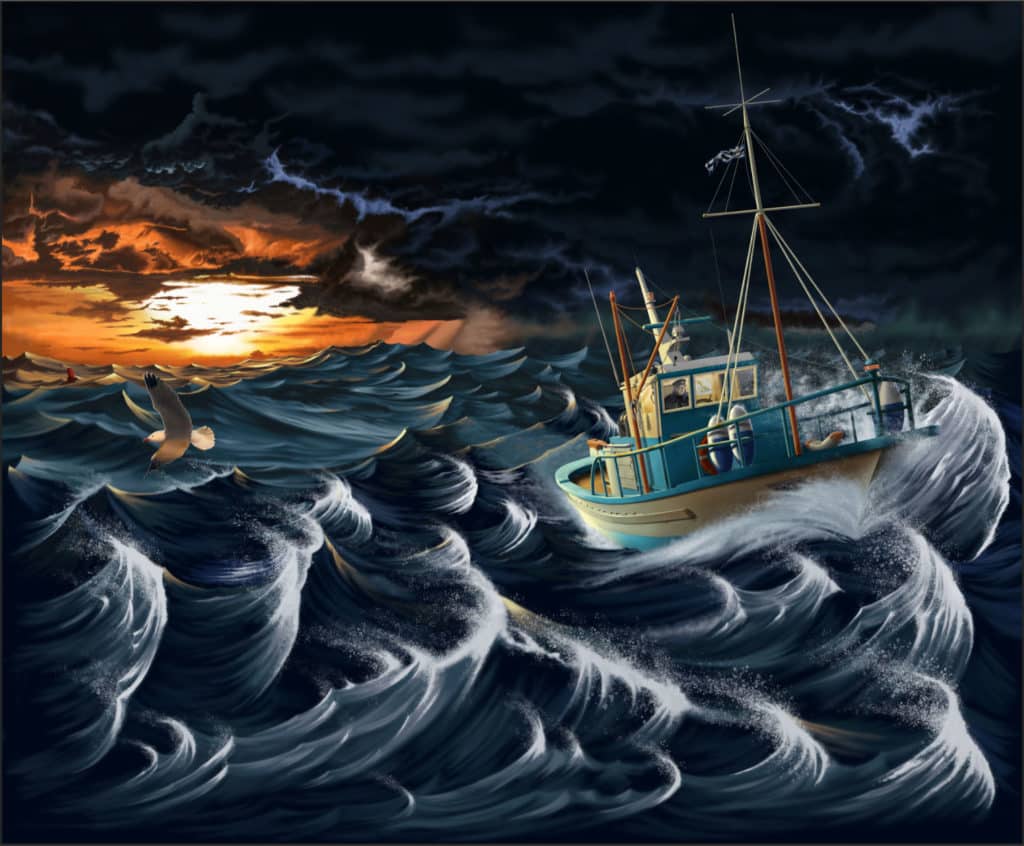 The outline of the brief was a simple idea to create an illustration for the latest beer label, for a dark beer; called “7 Μποφόρ” (7 Beaufort). The brewery is set in the Cyclades region of the Aegean sea, and so there was a defined emphasis to include the sea.
Specific requirements for the project were; dark, stormy and sea.

The basis behind the illustration was to emphasis the power of the elements; especially that of the winds that cause the rough seas around Tinos islands. From the early starting point of the name; “7 Μποφόρ” (7 Beaufort), it was evident that the image needed to show the connectivity between wind and water. So a design was initiated that would draw together those elements, but at the same time bring in the human aspect that would be the draw of the customer, and the people who appreciate the simple, but fascinating life of villagers on these small Greek islands.
As the product was a dark beer, the request from the client was to have a dark and moody scene. The resulting concept was to have a contrasting element of the sun (in the form of a sunset) which is well know in Greece, combined with the approaching storm. It was obvious a lot of working out had to take place to make the artwork work in a way that complimented both elements. The lighting on the elements, from the sun, etc.

Even though the design of the illustration was intended to be the main focus of the label. There was a call to request a more detailed version, as this could then be employed in necessary advertising aspects of the promotion of the new beer. Therefore, as the image was created, it was set at a high resolution aspect ratio to allow for close element detailing. 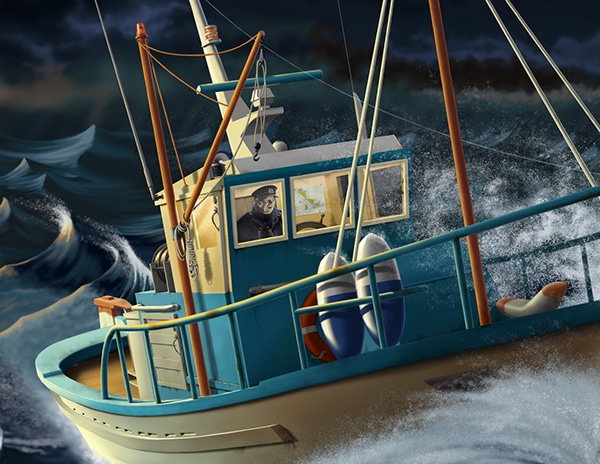 This image shows one of those parts; the cabin of the boat. The detail is so extreme that a detailed shipping map of the Tinos area of the Aegean and a full rendering of the Captain was included to make the ship as life like as possible. 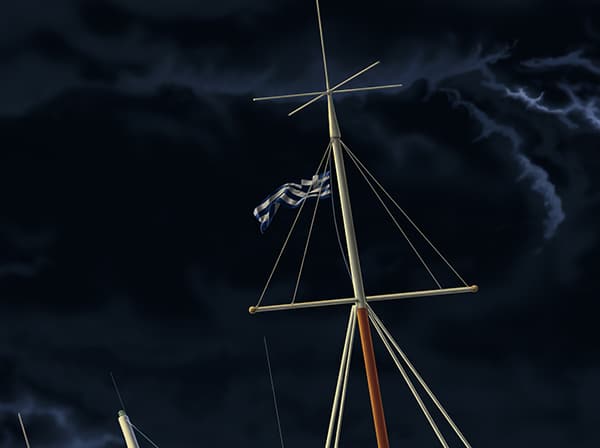 As the 3d Warehouse model was not exactly to the requirements of the concept of the boat, certain aspects were changed and others rendered on the fly as the illustration was developed. The client sent an image of a Tinos fishing boat, so a mast was added to give it a more island feel, as well as the obligatory Greek shipping flag. 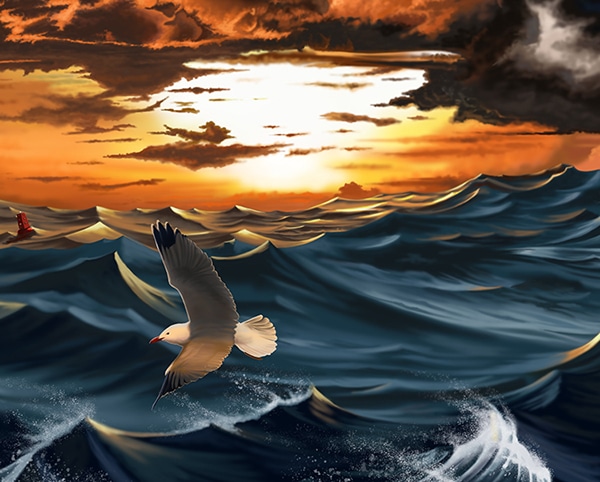 In the original rough sketch that was approved by the client, an albatross was pictured soaring over the waves. It was suggested by the client that the idea was good, but as albatross do not frequent the Cyclades, then it should be replaced with a seagull.

The process of painting the bird was more complex than thought. Even though a reference image was found to help with the shape and form, there were no real references of bird flying at sunset. So the colouring and shade were all referenced from a single image of a gull sitting on a bay dock, as the sun went down. 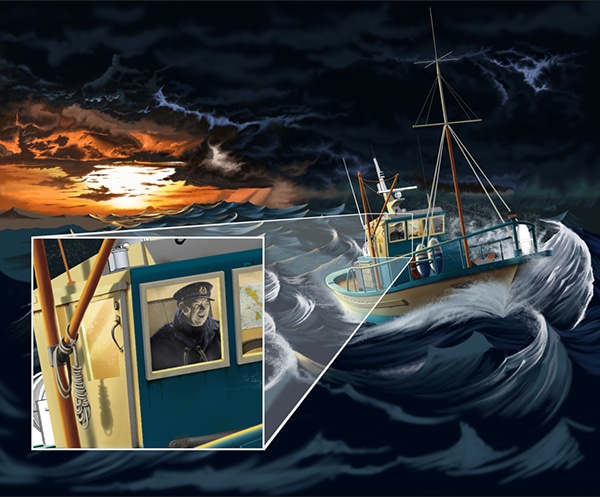 This detail shows the minute detailing added to elements of the illustration during the painting process. The square on the left is a zoom to a small portion of the cabin area.

A short animated gif showing the process by which the illustration was built up. As you watch, note that many times a new part is implemented maybe some 2-10 layers are added to make the piece work.
As this was a full scene, the decision was made to begin at the back and move forward. Spending some 5 days alone to make the boat work as well as it was needed. 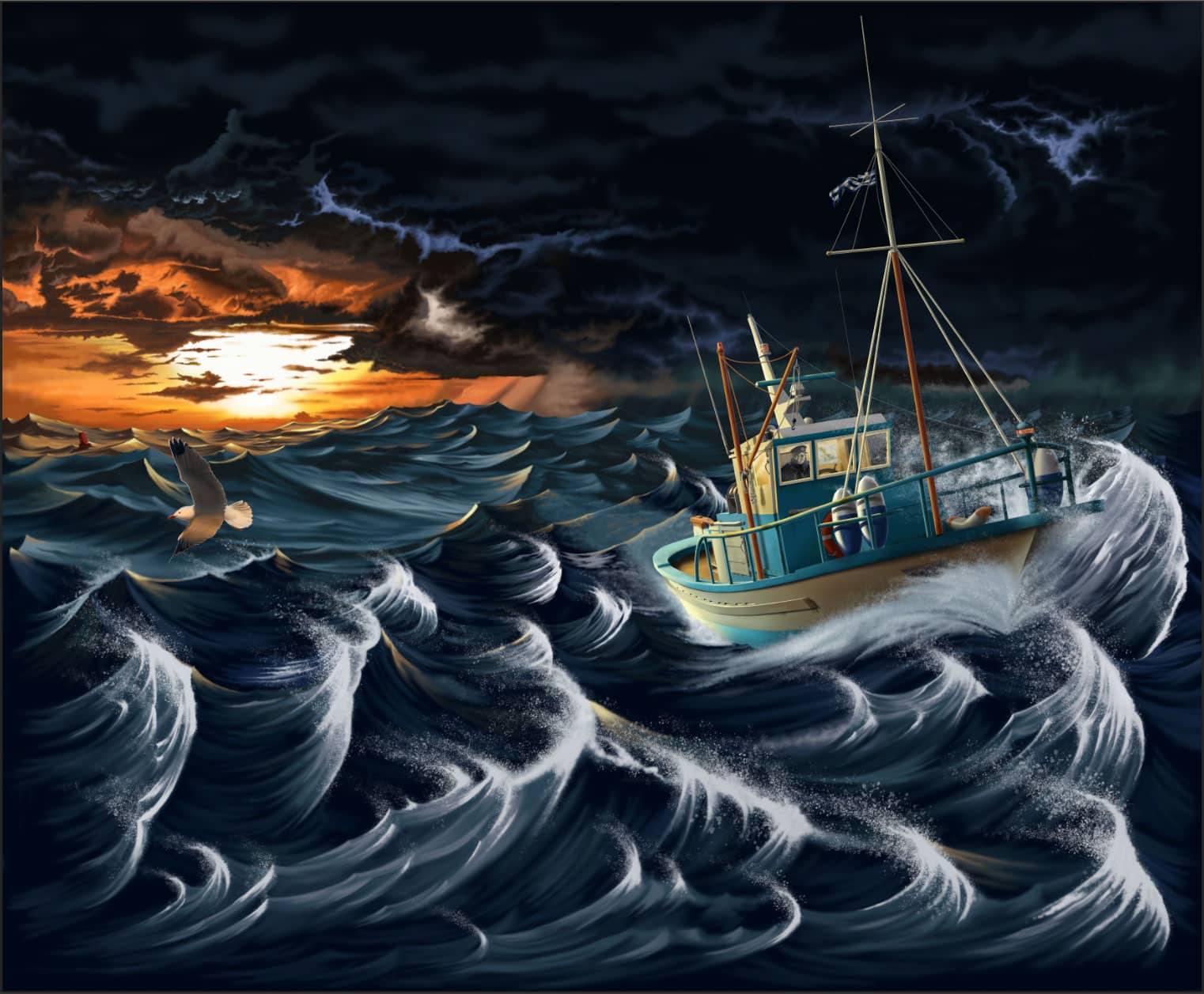 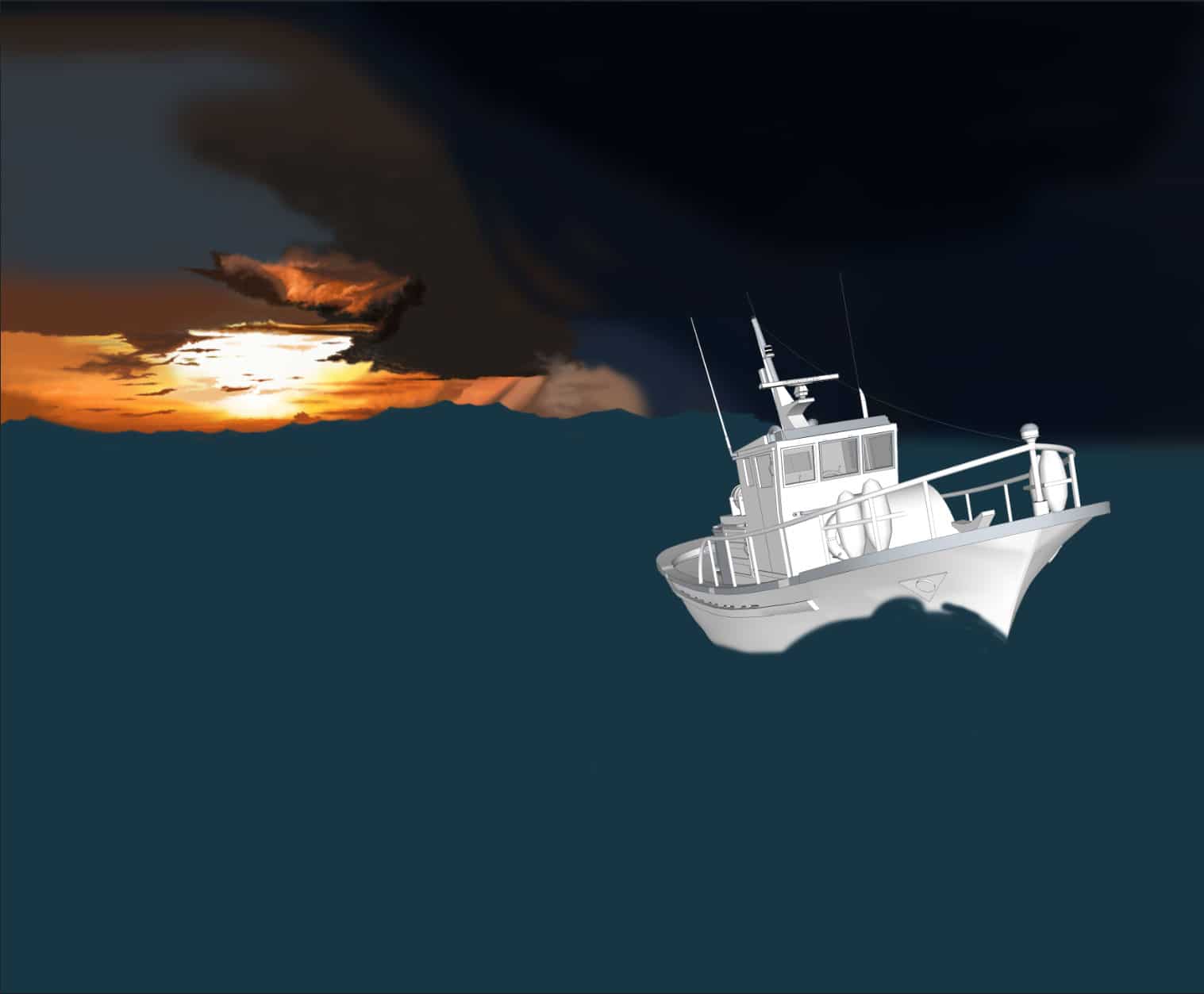