The Devils you Dare!

Image to the super hero 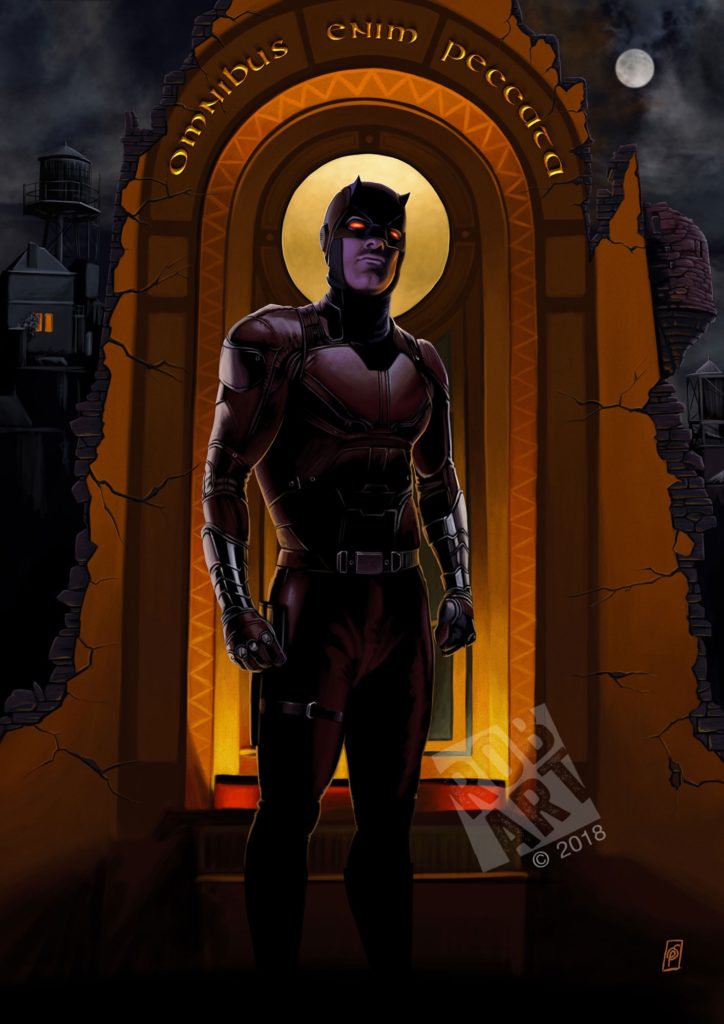 Dare I? Recently I was asked to participate in an exhibition of Comic Art and Illustration. Although I had a great deal of normal illustration work, the requirements were that the piece was never published up to the date of the exhibition. So, I thought it maybe good to set forth and create a new piece that combined both skills.

Although, I have not done much in the way of comic book art, I am a big fan of many of the Netflix-Marvel spin-offs, so the first thing that popped into my mind was to use some of that gritty and dirty feel in an illustration. After a little consideration, I decided to jump at my favourite character – Matt Murdoch (DareDavil). It was an easy enough decision to come to pick the character, but the scenario took a little time. Funny enough, it was whilst watching an episode of Marvel’s Luke Cage, that the idea popped in. Luke was talking to his father in a church and the window reminded me of the halo affect that occurs in Greek Orthodox icons. The idea was sprung! 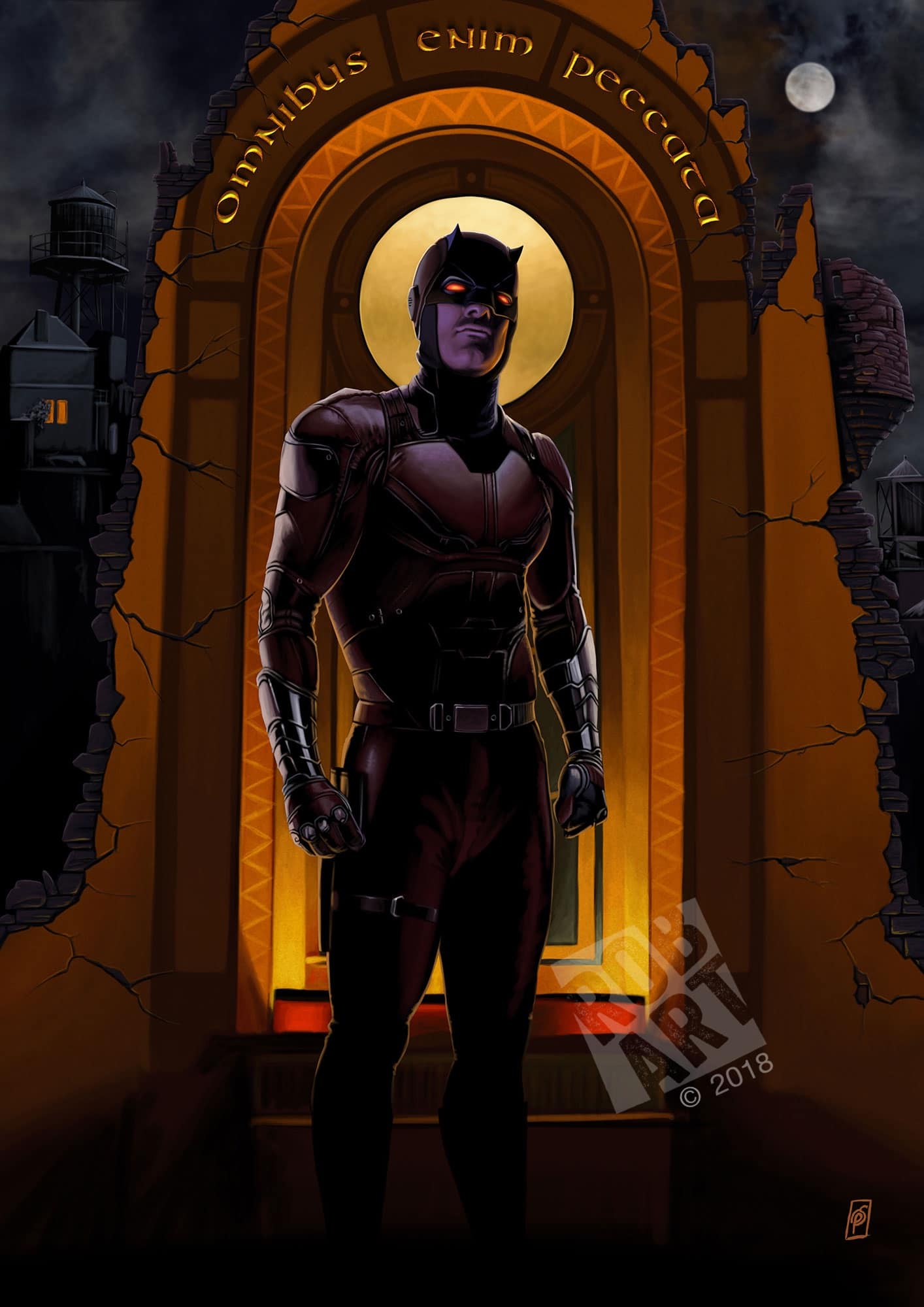 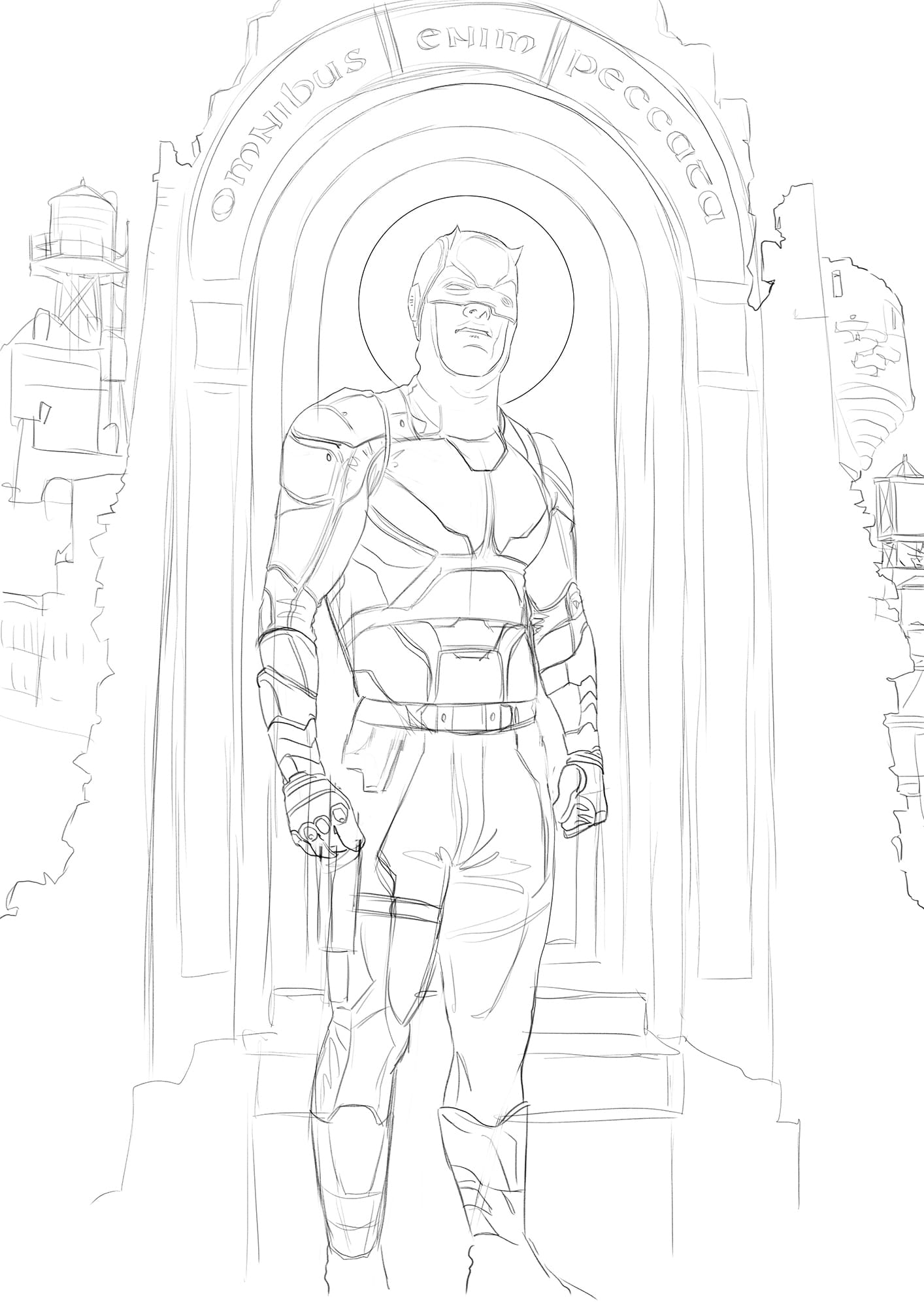 The idea of the devil and sin popped into mind, when the church halo was noticed. The idea that DareDevil is good, but carries an evil pseudonym seemed a good play to work around. I did some research in latin, and having watched all the series, I felt that the main play was the value of sins. So, I came up with the idea of the saying “Omnibus enim Peccata“, which is “Nobody is without sin!”

The composition then began to form. the focus was to make the head sit in the circle of the church window, in order to look like an Orthodox Church icon. One of the things I notice about DareDevil, when watching it. is the rooftop sequences all set to have a waterpower in them. An even the slick title sequence has one too. So, I wanted to play on that too and have one or two in the background. For that to work the church had to be in ruins.

The whole thing took over 25 reference images to get the look and feel right. The video above shows the whole rendering of the piece, which only took 2 days in total. And it was important for me to try something new in the illustration process. I really liked the idea of playing with the chiaroscuro feel of a painting. Severe dark and strong highlights in the necessary area.

Overall, I think the piece came out very well, and I hope it was well received at the exhibition.

If interested in any of my caricature or animal art, please visit my online store for details. Or if you are interesting in commissioning me, contact me via my Fiverr Pro account.