Biden - Harris and that Dem Donkey!

Caricature design of the new president

After the success I had with my initial caricature of Joe Biden and Kamala Harris for my Celebrity Sunday series, I thought I would get started on capturing a full body version of the duo. This time however, I would include the iconic Democratic donkey as a key element in the design.

This was a self-motivated project to basically help in the development of my skills. The full project was achieved in spare time between commissions. 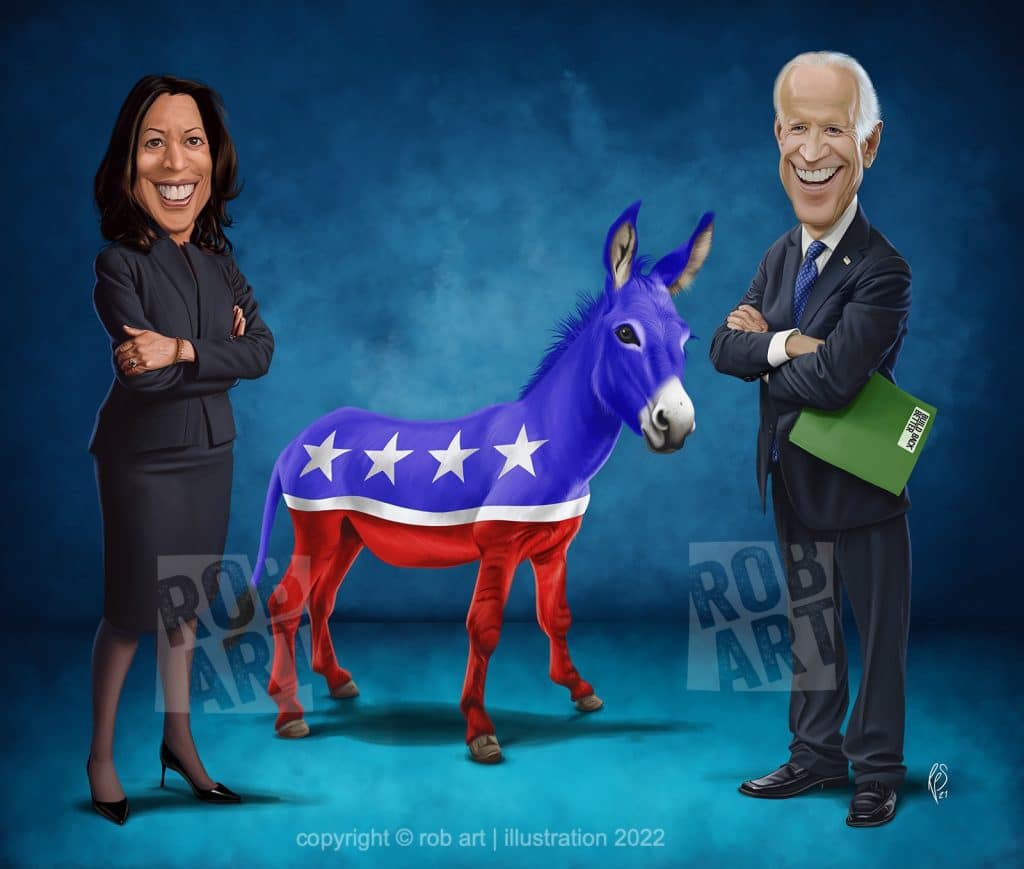 The brief was very open as it was created by myself. The only real aim was to include all three elements in a creative way that could show the development of skills and good composition. To aid in the drawing together of the elements, I chose to make the piece look like the trio were in a photoshoot (different from the typical look of my Celebrity Sunday series), and have a backdrop painted to give that feel.

During the process I decided to have Biden hold a folder and place on the label “Build Back Better“, as it was the key legislation going through at the time of the rendering. The only other main aspect that needed to be taken into consideration was the donkey needed to be a real life version of the icon for the Democratic Party, which has the American colours marking the animal.

So, the process took some time in the research stage, as I had to look at many photos of the three elements to get enough referencing to make a composite image. In all it took three photos of Joe Biden, two of Kamala Harris and three of the donkey to get the sketch completed.

The rendering started with Joe and I wanted him to have his typical forward stance, and maintain his smiling face. There was a change in the face rendering (which you can see in the video) as it came across as part of his face was misshaped to make it look like Joe. Overall the rendering of Joe went well.

The main issue now was the donkey, which I did next as I moved right to left. There was no reference to a donkey in US colours, so I had to use some tricks in Photoshop to convert real donkeys into coloured versions which I then used to get the sample colours required to render the animal out. All in all it worked out great, and I wanted to make sure that the nose, eyes and inner ear remained the original colours.

Finally, Kamala presented some complexities in rendering as the body, lower body and face reference were all from different photos and all had different lighting conditions from each other as well as from Joe. Eventually I got it all worked out and the final image looked good.

All was achieved in Photoshop, after initial sketches on paper and some digital enhancements.