The entrance to the Christmas gala at Blenheim.

It’s a good feeling when satisfied clients come back for a return commission. They give you that feeling that you have done a good job. A previous work last Christmas for Blenheim Palace seemed to be a hit at the Christmas Gala that the organisers decided to call on me again to repeat the illustration; with a new theme. This time it was the White Rabbit from Alice in Wonderland. The project was the same set-up but different images. 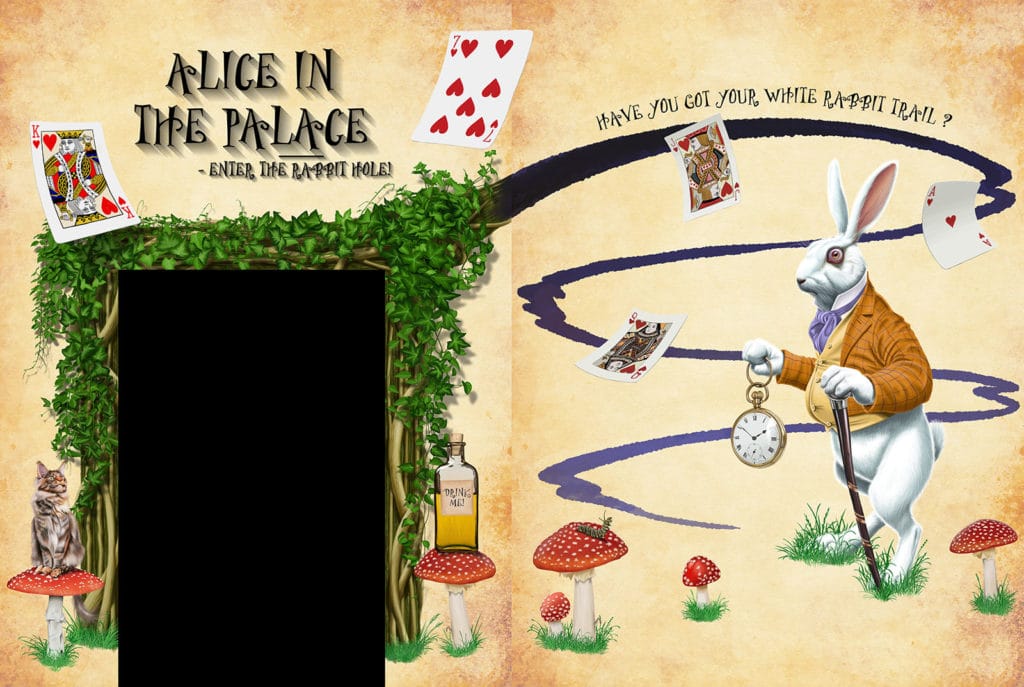 “ALICE IN THE PALACE” – BRIEF

The outline of the brief was a simple, to create a set of two illustrations that would be printed and placed on a curved giant spread of a book, to act as an entrance way to the annual Blenheim Palace Christmas Gala. This was the second year I had done this work, so the layout and format was very familiar to me. All I needed to do was build a concept from the mood boards the organisers had sent. After a little discussion and direction, I explained as it was the lead into the wonderful delights of Wonderland, then the images should be not ‘so’ spectacular, as like it was walking to to the gala hall that brought everything to life.

There were some requirements to the design. The White Rabbit was essential and the idea of a trail going into the doorway. So, with thinking cap on, I came up with the idea you see above. I added the concept of the floating cards to show the path as a drawing mechanism to the hole in the bushes and the way into Wonderland.

The concept was simple, two parts of equal size to span a wooden construction in the shape of an open book. the left side housing the cut out entrance that would lead into the hall of Blenheim Palace and the Gala of events. The size was determined and the reflection of last years aged book texture as a background was also a requirement. The reference for the White Rabbit was based on the original drawings by Sir John Tenniel with beige costume and watch hanging. There was a little modification made to the look and feel to modernise it and make it original. In addition to the right side a set of toadstools were rendered and one in particular had a caterpillar from a Monarch butterfly sitting looking on.

The other side (left) proved to be more complex and tiring. The whole of the surround required some vine and bush look. I decided to use ivy plants and this proved a challenge to paint. Not for detail but timing. In addition I added more toadstools and above each I added familiar items that would later be magically transformed in the halls; the bottle with “Drink Me” on it, and the Maine Coon Cat, which was to represent the Cheshire Cat. All in all a pleasant illustration to piece together. 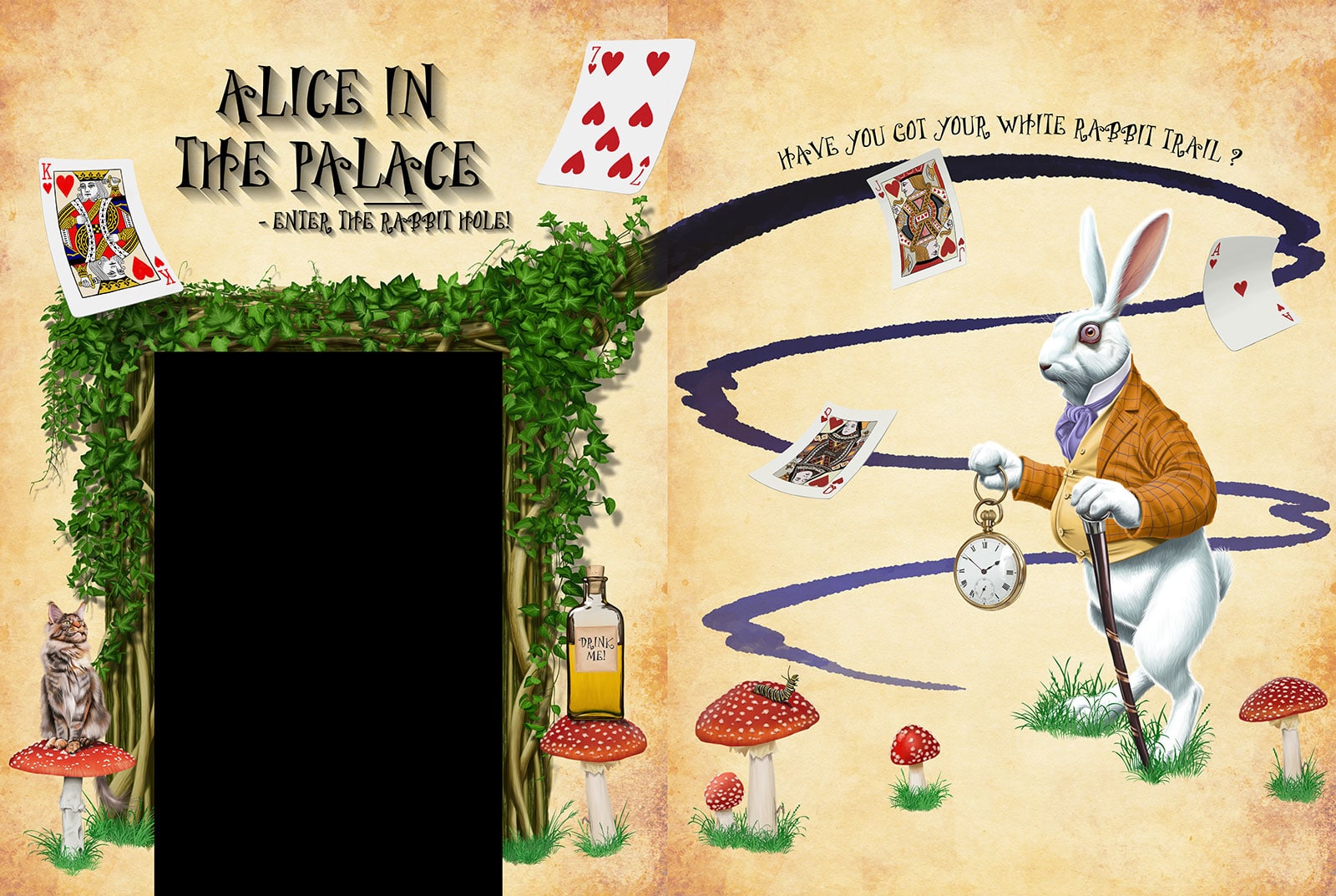 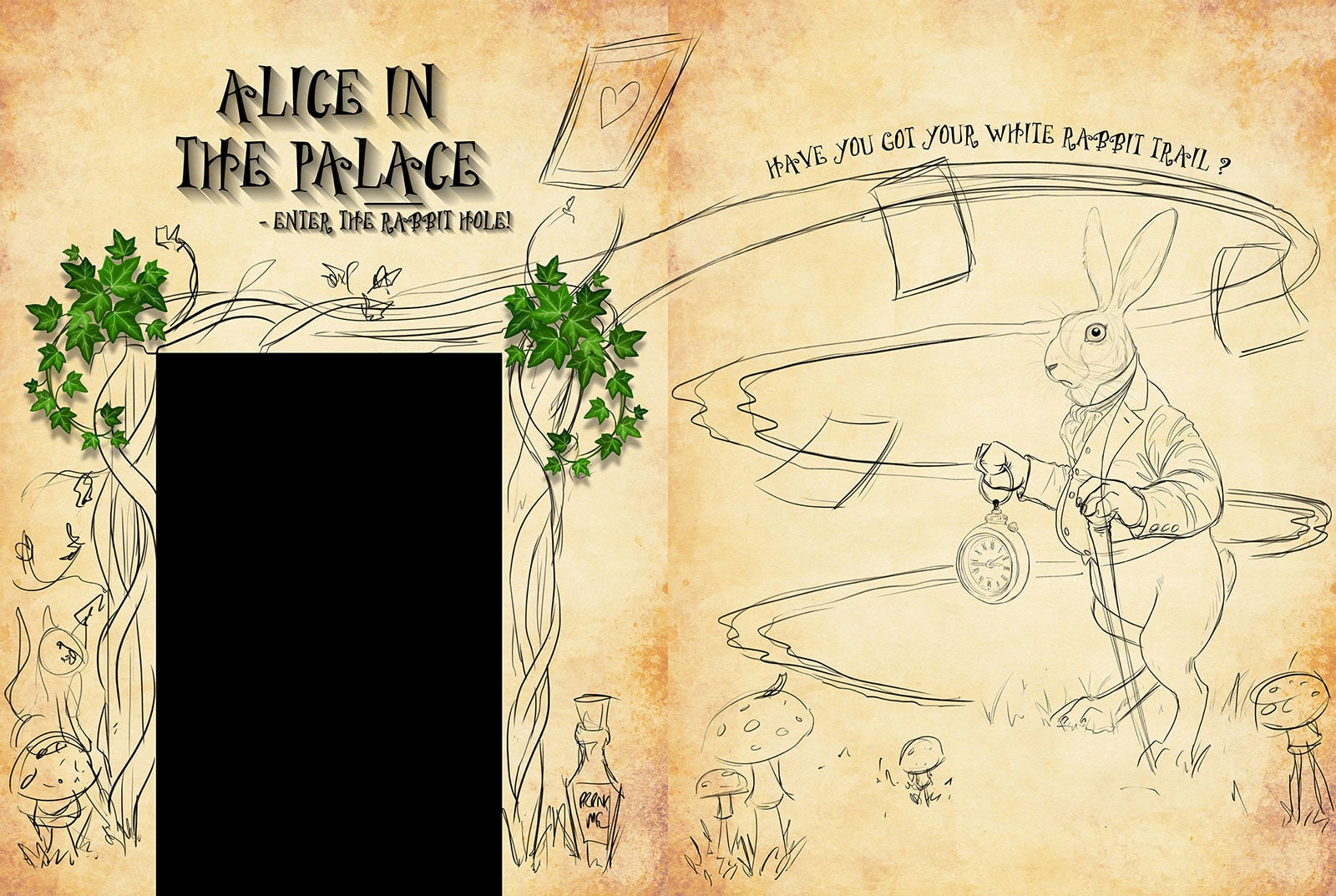