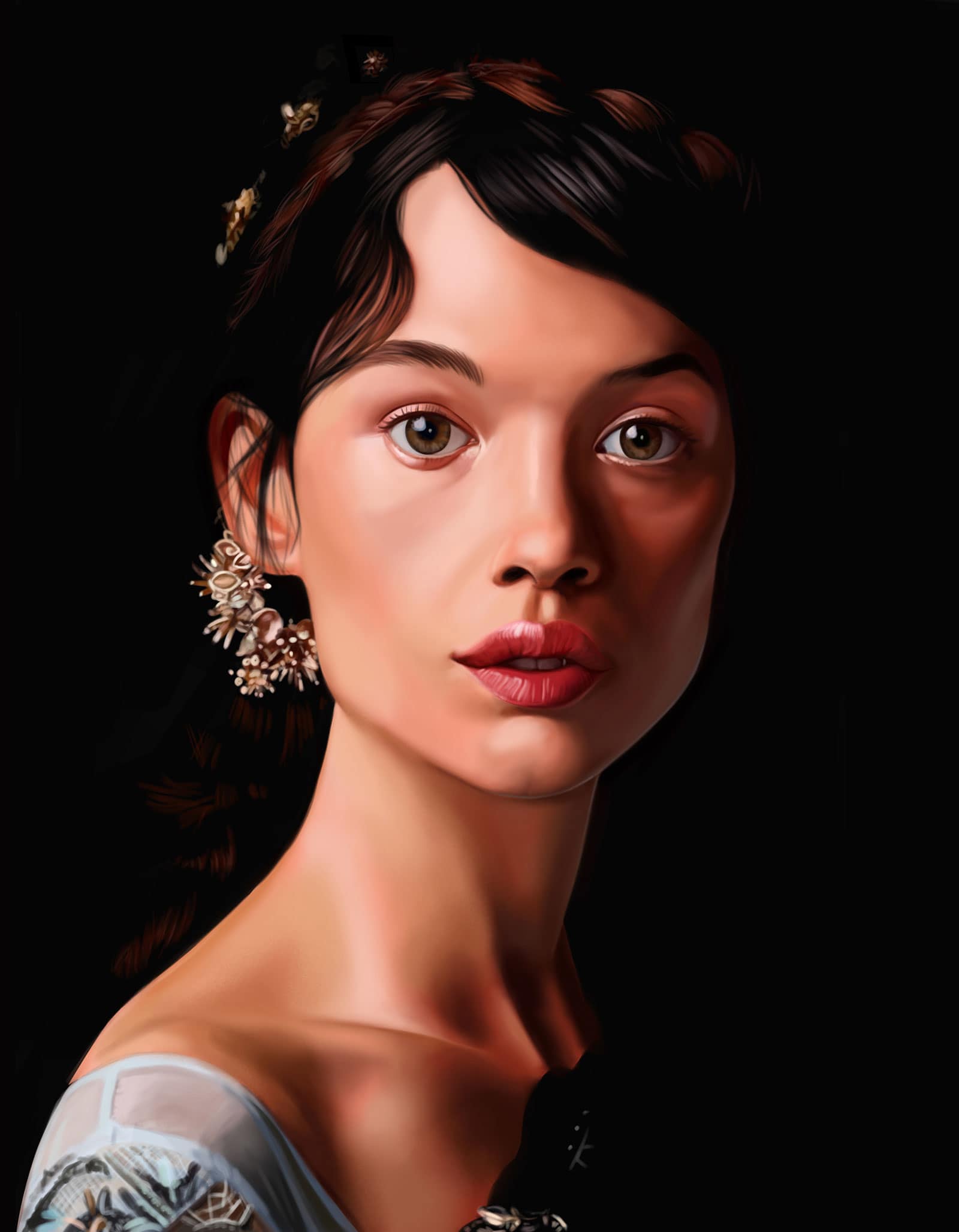 [vc_row][vc_column][vc_text_separator title=”Keeping the old skills polished” subtitle=”A week long challenge to render a portrait” style=”small”][vc_column_text]During the last week in November I took part in the Facebook: Five Day Portrait Challenge by Paintable. Honestly I don’t think I need to do the course to improve my skills. After all I am a professional illustrator, but I thought it would be good to freshen up some ideas and try something new. I must say I did learn somethings new, and had a lot of fun doing what is a key aspect of commercial work; which is working to a tight deadline. So, as a review I am posting the stages and discoveries here.[/vc_column_text][vc_text_separator title=”The Final Rendering” subtitle=”Based on a reference image “astrid-berges–frisbey“” style=”small”][vc_single_image image=”108341″ alignment=”center”][vc_text_separator title=”Day One” subtitle=”Sketching out the portrait, using Geometric build.” style=”small”][vc_column_text]Even though these were classified as day tutorials, most of the activities I did over this week only took like 2 hours maximum. Which was ideal for me, as I started the approach at the end of my working day. So, with a little trepidation I began this quest to look at something new. The first point was too install all of the required brushes that Paintable suggested. If anyone is interested, these are available here, and here!

These brushes provided some of the effects required to follow the Paintable tutorials, but were not exactly necessary. The main Ain of the first day of portraiture, was to build up a reasonable sketch of the reference image. The reference I chose can be seen in the Before/After image at the bottom of the page.

The approach used by Paintable, that was different to my normal approach, was called Geometric sketching. The whole idea behind this was to see the main shapes of the form as simple shapes, and not the complex shapes that there could be. I really liked this approach and it seemed to make the initial part of the process move a lot faster than my normal approach, which I tend to usually do by hand in pencil on paper.

Once the initial geometrics was created you basically move onto the adding of more prominent details. Again this moved well, and ended in the final stage that was the finer details. All in all the whole process took little over one hour to complete (which was compounded by the fact that I had accidentally made a mess of resizing my screen captures for the video, and so had to start again). Day One was over and the sketch was awaiting the painting. I had some fun and learnt some new techniques. The week looked promising.[/vc_column_text][vc_column_text]

[/vc_column_text][vc_text_separator title=”Day Two” subtitle=”Adding the colour in three main forms.” style=”small”][vc_column_text]Day Two was about blocking in colour. Again, following the Paintable approach this was relatively simple and quick. The hardest part about colour is the deciding of that colour to use. Paintable uses this method of sample and alter on a “L” principle. I much prefer looking at the original image and to do constant sampling. I did agree that there was a need too tart at a base mid-tone and so that is where I started.

After that the only other process was to add the highlights and deep-tones. As I mentioned before this was probably the easiest part of the five day challenge.[/vc_column_text][vc_column_text]

[/vc_column_text][vc_text_separator title=”Day Three” subtitle=”Blending the basic colours into a more real image.” style=”small”][vc_column_text]Day Three moved the colour stage to the next level. Through the tutorial it was made clear that the simple action of smoothing the colour was not the best approach. Instead Paintable made clear that the geometry of the face had to remain in the hard lines a polygonal form would have; such as the cheekbone.

So, based on that, and using the tools provided it was important to blend the colours in a more micro level, and trying to maintain any kind of hard edge that would natural exist in the face. Now, Paintable has his own style and style is an indicative aspect of everyones identity. This is where following tutorials sometimes can make your work a little fake and standard. It will always look a little like teh person that you are following.

I have had the comment made that my style is very recognisable, and it was a little hard to do the tutorial solely as described by Paintable. I found myself reverting back to my normal habits of painting and blending the way I prefer and enjoy to blend. Nevertheless, I did do some of the styling as Paintable did, and for this reason I felt it took a little longer than I would have normally done it. But during the process I did find out one practical technique that aided in the process a lot (will be discussed in one of my Patreon Tip videos).

This was one of the longest days. I personally felt this was because I like to be a perfectionist and you can see in the video (below) that I alter and realer the shapes of the face and elements a bit, to get it right. So much so, I ended up having to postpone this completion till Day Five.[/vc_column_text][vc_column_text]

[/vc_column_text][vc_text_separator title=”Day Four” subtitle=”Adding the details of the image.” style=”small”][vc_column_text]Day Four was probably the most complex out of the whole session. It was when I had to start making the forms look more real and closer to the reference image than ever before. For some reason, after watching Paintable‘s video, I felt that I needed to flip back into my mode of detailing skills. I was good at that, and as my slogan refers to (It’s in the detail), it is what I am most commonly known for.

So, I flipped on my classic regular brush, zoomed in and started detailing as I would any normal image I would do. For this reason, the allowed time shot by, and before I know it I was out of time for the day’s session. I had managed to achieve results in the main facial features which was good and the portrait was looking top notch.

When working like this it is easier to see some of the striking mistakes (even at this stage), and I managed to correct them very well without too much fuss on the skin tone areas. This was mainly in the mouth area and one of the eyes.[/vc_column_text][vc_column_text]

[/vc_column_text][vc_text_separator title=”Day Five” subtitle=”Continuing the details and styling..” style=”small”][vc_column_text]Day Five turned out to be a quick revision and scan over the artwork to see if there was any details that needed redoing, touching up and adding. The Printable tutorial was interested in teaching the addition of styles and overlays to make the portrait more fresh and pop a little. I found this wasn’t suitable for my style or image and so I used the day to conclude the portrait I had started.

[/vc_column_text][vc_text_separator title=”Conclusion” subtitle=”What did we gain from this experience.” style=”small”][vc_column_text]To conclude the five day experience I thought I would go over what I had gained and leant from the experience, via Paintable. Firstly, I feel that if you put your mind to it, this could actually be achieved all in the same day. Especially with those who consider themselves professionals, and have honed their painting skills. The five day break down was to allow for working people to do this exercise in comfort over the five days.

So, what did I lean. Well, practically speaking I learnt the art of geometric construction. This was a very good approach to design the definitions of a portrait. Not sure how much it would help me in caricaturing, as the forms are distorted. However, it was a good approach and I will endeavour to use it in the future. The method of colouring was interesting, but to be honest, my style of sampling really didn’t need this new aspect. I can have it as a backup plan, but for now I will retain my usual method of sampling colours.

Finally, discovering three new Photoshop plugins was great. The you re working in Photoshop, jumping back and forth between pop-out menus is tiresome, so having these new plugins was a great addition. They are BrushBox, Coolorus, and Mixoos! So with all that knowledge and assistant I am planning on striving forward to achieve greater things. It was a great course to take part in and I would recommend it, if it is rerun.