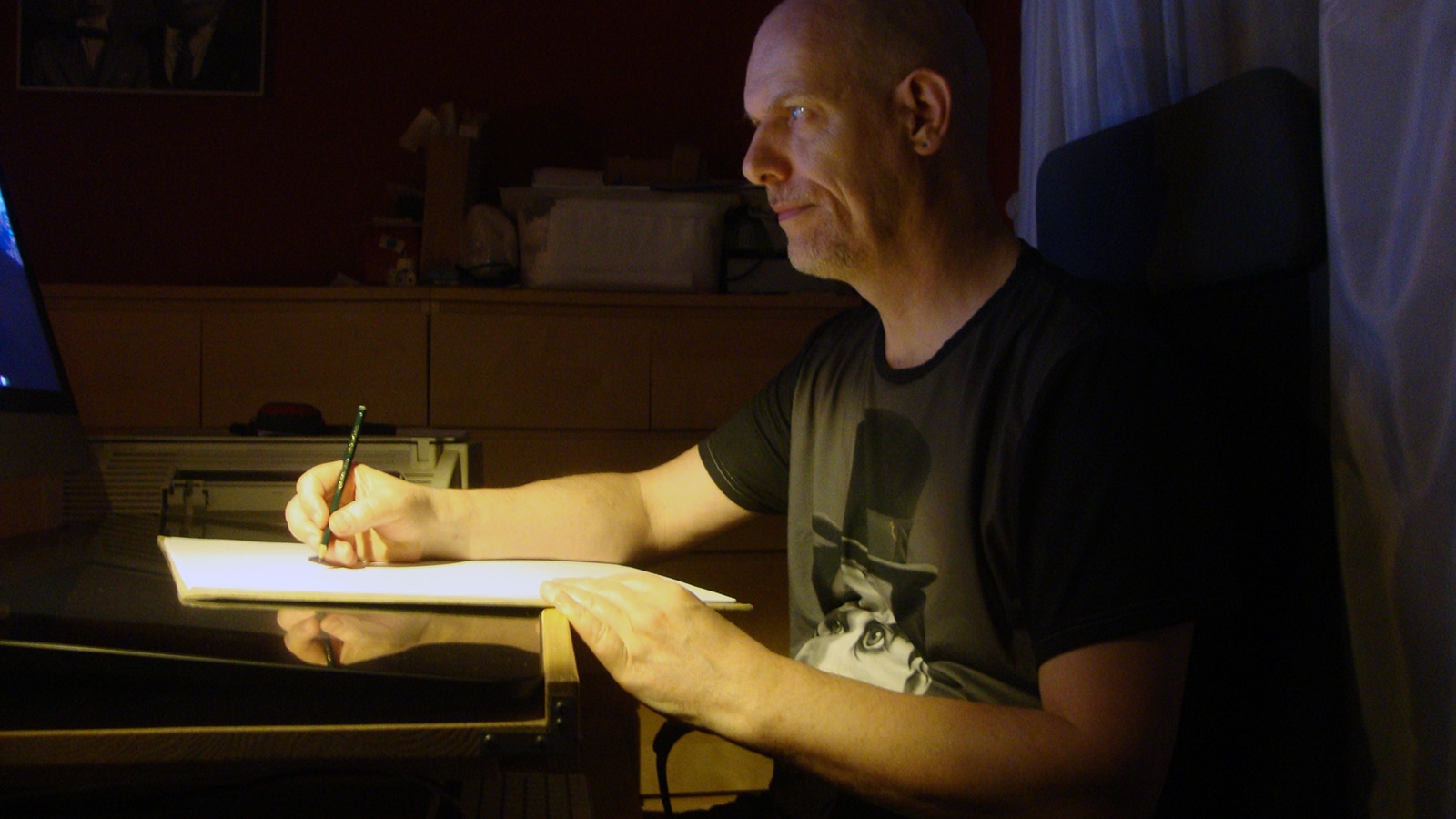 [vc_row][vc_column][vc_text_separator title=”Rendering out the Ai Weiwei caricature” subtitle=”The Celebrity Sunday process” style=”small” margin=”20″][vc_column_text]I was asked a couple of weeks ago about my Celebrity Sunday challenge; a challenge I try to do almost every Sunday (rain or shine), to render out a caricature of a well known celebrity. From 9,00am GMT I start to add a section of the caricature I release that Sunday in order to ask people to guess their identity. Each hour following the start point I add a new image with a little more detail revealed. Someone asked me, do I have the caricature completed before Sunday and just simply reveal one image each hour or do I do it live? Well, the truth is I do each caricature live each Sunday. This was the challenge some 5 years ago, to help improve my rendering skills in both style and speed. This article will explain what I do to get each caricature down, and I will use my latest caricature Ai Weiwei as an example.[/vc_column_text][vc_text_separator title=”Saturday Afternoon” subtitle=”Trying to decide on a face!” style=”small”][vc_single_image image=”77414″ alignment=”center”][vc_separator height_2=”10″ height=”10″][vc_column_text]Even though the event is called Celebrity Sunday, I tend to think about the caricature I want to do during the week, or at the latest on Saturday morning. This then give me time to render out a pencil sketch of the celebrity, in order that I can get an early start on the painting process on Sunday morning. In the case of Ai Weiwei, I was thinking about him during the week, as my personal website was getting hit again by a series of Bruteforce attacks and BadBots from China, and so he popped into my head. I guess the lateral thinking process of seeing his political struggles in activist role had some comparison to my woes with the counterfeiting and image theft from China. So, the choice was quite easy.[/vc_column_text][vc_single_image image=”77416″ alignment=”center” img_link_custom=”https://robsnow.eu/?s=Ai+Weiwei&post_type=product”][vc_separator height_2=”10″ height=”10″][vc_column_text]What I tend to do is look through a series of images of the celebrity and find several, or at least one that I can use as a starting point for the caricature. Sometimes it is hard to find a straight on portrait, but in the case of Ai Weiwei I managed to find three good ones. One of which HAD to be in colour (more of that later).

I can spend between 30 minutes to 3 hours trying to get a likeness in the caricature. I am hoping that over these past five years that my ability to see some of those facial oddities has improved a little, but I would say that some people are a lot easier than others.[/vc_column_text][vc_single_image image=”77412″ alignment=”center”][vc_separator height_2=”10″ height=”10″][vc_column_text]So, by the end of Saturday afternoon; around 7pm I try to make sure I have a rendered pencil sketch of the chosen subject (like the image above of Ai Weiwei). This is then scanned into my iMac using my trusted and ancient Epson scanner, at around 600dpi. I tend to use this high setting so that I can retain a lot of the details and it will appear in the Photoshop document at a good size, when imported. This sketch is then patched together from the two A4 scans into an A3 image, and placed into a Photoshop document that I use, which has the standard background I use for the caricatures and my monogram already in place. The reason for the grey background is mentioned inn this post![/vc_column_text][vc_text_separator title=”Easy like Sunday Morning” subtitle=”The challenge begins!” style=”small” margin=”20″][vc_column_text]So, the big day arrives, and after my early morning dog walk and scan on social media sites for the daily catchup, I open up Photoshop and fire up the Wacom Cintiq 27QHD drawing screen. I then, have to make sure I do a series of procedures during the rendering so that I can get the day sone as quickly as possible. This will include taking a screenshot of the process for a speed rendering animation I do to show this process I follow. You can see all the available ones here![/vc_column_text][vc_single_image image=”77418″ alignment=”center”][vc_separator height_2=”10″ height=”10″][vc_column_text]So, once everything has been set up and I am ready, I tend to start painting around 9.00am GMT+2. This gives me enough time to render as much of the top section of the face as I can. I tend to start with the eyes and then move up to complete the forehead, and then work down to complete the whole caricature.

As per my normal process, I take the sketch layer and place it at the top and set the layer blending mode to Multiply. This makes all the whites transparent so I can paint underneath and still see the sketch I have done overplayed. It is quite a useful and effective method of rendering out if you want to follow a drawing exactly.[/vc_column_text][before_after before_image_id=”77424″ after_image_id=”77423″ width=”1000″ angle=”0″ return_on_idle=”true” arrows=”true” arrow_color=”#ffffff” arrow_gap=”10″ arrow_offset=”10″ before_caption=”iMac 5k Viewing Screen” before_caption_color=”#ffffff” after_caption=”Cintiq Rendering Screen” after_caption_color=”#ffffff”][vc_separator height_2=”10″ height=”10″][vc_column_text]What I have discovered now is that, as I have two screens, I can have a full screen view of the caricature visible on my iMac 5K while I render out the caricature on my Cintiq in detail. To do this you simple need to go to Photoshop’s Arrange Menu Item and near the bottom it will say (in this case) “New Window for ai_weiwei.psd“. If you select that and then place it on your second monitor, you can use it as a reference screen as well as a live update on the full size image. I also use this screen to do the screenshot grabs each major step of the process.

So, the Sunday moves forward, and every hour I post a screenshot on Facebook, and Twitter in order to have the Celebrity Sunday Challenge move forward. There is basically four stages of the guessing game. As I previously mentioned, it begins at 9.ooam GMT with a flat face tome and eyes, and moves forward progressively until someone guesses correctly.[/vc_column_text][vc_column_text]

[/vc_column_text][vc_separator height_2=”10″ height=”10″][vc_column_text]Depending on the complexity of the caricature and the mode (whether normal colour, or the vintage series) it can take me in the region of 5 to 10 hours to complete one caricature. That said, I do stick to my guns and force myself to work until it has been finally completed. As you can see in the render above the whole process takes on a form of it’s own and in all cases does get finalised in the same day; hence Celebrity Sunday!

So, to conclude, and to answer the query, the caricatures are done live, and was done as a simple exercise in getting my skills tuned a bit better. I do recommend people setting themselves tasks and projects like this to help in their artistic development. It is always good to get a piece finished, and so placing a time frame on it helps considerable. As for the caricatures and Celebrity Sunday? Well, I am in my second season of both colour and Vintage and pushing toward 150 caricatures in total. I did take a year out, as I was getting tired of seeing people counterfeiting and misusing my images over the web, but at the end of the day my creative juices need to be satisfied, so I have started again.[/vc_column_text][vc_single_image image=”77421″ alignment=”center”][vc_separator height_2=”10″ height=”10″][vc_column_text]If interested in having an art piece done you can visit my Fiverr Pro account here, or like any of my caricature or animal art, please visit my online store for details.

All photographs were taken by my wonderful daughter; Lythia Phoebe Snow. My art is copyrighted, and you can check the details here![/vc_column_text][vc_single_image image=”77497″ alignment=”center” img_link_custom=”https://robsnow.eu/?s=Ai+Weiwei&post_type=product”][/vc_column][/vc_row]