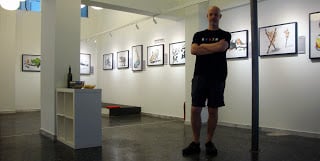 One of the things I put on my ‘bucket list’ some years back, was to hold my own exhibition. This was an addition to the list since I became confident at drawing, and also, after many visits to the great museums in London; like the Tate, National Portrait gallery, the V&A. So when I moved to Greece and started visiting friends exhibitions, the idea started to grew again. It wasn’t until I began doing my Animal Behaviour collection that the notion really cemented itself. This was promoted also by helping out a friend during his exhibition, some years previously.

Playing around with ink!