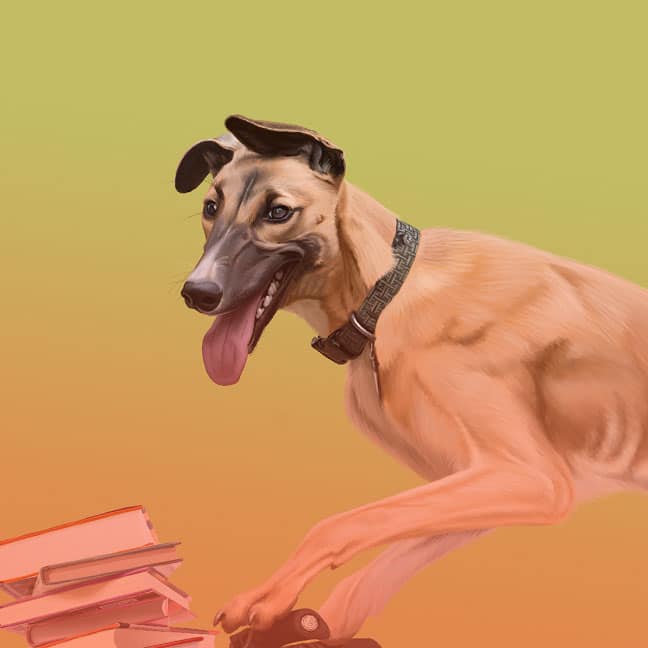 [vc_row][vc_column][vc_text_separator title=”Dogs do ride!” subtitle=”The companion rider”][vc_column_text]Dogs are a very close part of many people lives, including my own. So, after an eight month illustration process, the Kickstarter project is now finally over, with the completion of the five reward illustrations. It was no surprise to me, that even though they could request any animal they wanted, all five of the animals selected for the prize reward were canine; with the fifth one being a wolf.[/vc_column_text][vc_single_image image=”18893″ alignment=”center”][vc_column_text]The obvious principle behind many of them was to respectfully combine two of the reward contributor’s passions. The love for bikes, which gives reason to their desire to assist in the development of the book project, and their love for animals. One reason the book is becoming an obvious success. Three of the illustrations actually contained companion pets from the donators, in the form of a Collie dog, Labrador, and two Greyhounds.[/vc_column_text][vc_single_image image=”18894″ alignment=”center”][vc_column_text]For all the dogs, there was need for good reference images, and this was provided for the companion animals portrayed in these first three images. As for the other dogs, they were referenced online and posed in the sketch phase of the project (see here for one of the examples in the portfolio section).

One of the concerns, and especially for the Labrador who had passed before starting the illustration, is to get dynamic images of the animals in good poses that would allow the development of an illustration of these dogs on bikes. It wasn’t always possible, so the main characteristics were sort in the given material and pose shots were found to patch in the pose of the dogs on the bikes.[/vc_column_text][vc_single_image image=”18896″ alignment=”center”][vc_column_text]The illustration of the two Greyhound dogs on the delivery bike was even more of a challenge as it was a higher donation sum, and so I felt required a little more attention that the others. That, as well as the fact there were two dogs on the one bike, made a little more lengthy process in illustrating. Luckily the reference images were superb quality and so the detailing almost became photorealistic, as seen in the portfolio piece.[/vc_column_text][vc_single_image image=”18895″ alignment=”center”][vc_column_text]As part of the KickStarter process, I also offered to render out a time-lapse version of one of the animals being painted. This happened over several days and can be seen in these set of videos; Day One, Day Two, Day Three, Day Four and Day Five.[/vc_column_text][vc_single_image image=”18912″ alignment=”center”][vc_column_text]If you have any interest in my artwork, take a look here, and if you have any interest in any of my animal series you can find then in these galleries; Animal Behaviour I, Animal Behaviour II, Animal Behaviour III, Animal Behaviour IV, Animal Behaviour V, Animal Behaviour VI, Animal Behaviour VII.[/vc_column_text][vc_column_text]The process I took for each of the illustrations (if you watch the videos, see links above), was to sketch out the given bike and to carefully design the animal to suit the given bike positions. From that point (and with design approval) they were scanned and then the process of building up the layers to create the finished pieces would occur. This was done in Photoshop, on my Cintiq. The finished pieces are then translated into TIFF (CMYK) or JPG images and sent to be printed as a framed reward.

Tee-ing off in the store!