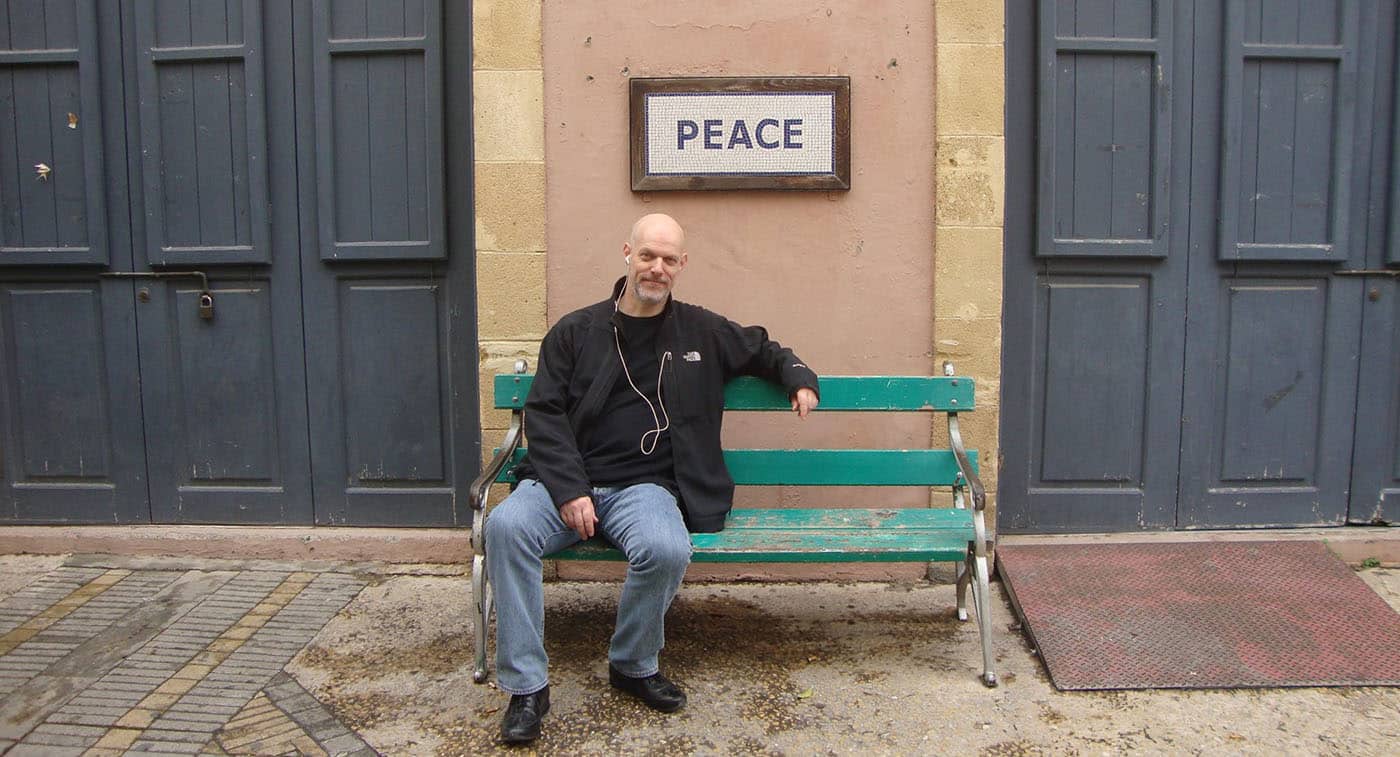 Thirteen years is a very long time to be sitting in a country and not travel outside it’s borders. This was my position here in my adopted country of Greece. I dislike flying, so never really make an effort to step outside the border, if it involves getting on a plane. Last year was time to throw that fear aside, Cyprus had invited me. Especially when I was given a great opportunity to do some good in the process. Graphic Stories Cyprus (visit their site here) invited me in March 2017 to attend their yearly conference and workshop event. This was the opportunity I was looking for. Explore a new country, spread my wings and do some creative work as well, in the process. So the tickets were booked, plans were made. Everyone said that the weather was always good there, so I had a delightful peace of mind!

As, a busy illustrator I ended up having to do the Keynote presentation last minute, but if anyone has attended any of my seminars they will know that I actually work for a capricious presentation, and only have some images to support the run of the theme. Nevertheless, I had to do something. Luckily, also (maybe from Boy Scout training) I like to prepare for the worst case scenario. I was told that Keynote would be available on a Mac, but playing safe I decided to do a PDF and a JPG version of the presentation. Good job I did!

So, bags packed, at airport and waiting for take off. Two hours later I arrived in the darkness of Cyprus. A short pullman trip and I was in the capital meeting my two hosts; Aggeliki and Miltos (more of these two later)! So, my trip to Cyprus, as said, was first in thirteen years. So, setting up in the hotel was a novel experience. I wasn’t aware that the key card was also the electricity activator, so was stumbling around a dark room for some minutes before I decided to ask. Anyway, I was here and met the other speakers for dinner, and got to know everyone.

Friday, seminar day! Got to spend the morning exploring Nicosia a little. Unfortunately all the rumours that Cyprus weather was amazingly perfect and not to have worries of clothing, etc, were immediately dashed as I sat at breakfast watch the rain pour down. Being English it didn’t dampen my spirits and we wondered around, and visited the border. Found a coffee shop that a colleague had designed the logo for. Then it was time to speak. I was second on the roster, and the time came quite quickly. Luckily, with my years of experience talking in colleges, I had no worries. The only issue was my sense of humour! Luckily it seemed to go down well, and so my insightful trip into my working life and process was an acknowledged hit! There will be a video of the talk, so when it’s posted I will link it here. The strangely funny part, is apart from the senior figures coming and talking after the event, there were several occasions young people passed, said hello and then scuttled off. A shame, as communication would have been a good bridge to getting to know some of them. After the full programme of seminars, we were taken downstairs to enjoy the yearly poster competition exhibition; Nicosia: City of Utopia.

Again, a very enjoyable event. One main happening during the whole thing. I tend to look around and select which I feel is the best image out of the array of contestants. I was looking around and found a print there which blew me away. By far I felt it was the best image of the whole show; not the winner, but very well done. I looked closer and found it was one of my fellow illustrator friends I had known on Facebook for many years. Goes to show I guess.

After a well planned evening and final celebration for the birthday of our host; Aggeliki, it was time for bed.

Waking to rain again (in the forever sunny country) I found my workshop was to take place in the Bank of Cyprus’ main building in the city centre. The same building that housed the seminars as well as the exhibition. Also, I should point out, as I was fascinated by it all, there were permanent exhibitions of ancient coinage and artefacts in the museum areas. Noted, as I had to pass through them each time I went to the workshop class. I had 12 students. All willing and wanting to learn digital art with a touch of traditional thrown in. So, as a two day practical exploration I decided to look at the principles of how I do my caricatures. That was decided as it was the quickest form of art I do (typically taking 5-10 hours per piece). I started with a short talk about my work in more detail, including the issues if copyright and working via the web. Explaining my development of Artistic License as a method to help artists combat the problem.

Then we moved onto the process of building up a caricature. Only troubled by the transference of technology from Mac to PC during the event, we managed to get a sketched out plan of Guillermo Del Toro in place and scanned, by the end of the first day. All the students also participated in this and did surprisingly well for the first attempt at such an activity. So we ended the day off by going to a second exhibition, which was being held at a print press office, and the venue for the other two workshops. Although my friend, Lila Skanavi‘s exhibition was great, through the World Graphic Designers group, the set-up and items in the venue were also amazingly tantalising. Old print presses, and block type in draws, and the general smell of the place was fascinating and memorable of days gone by. An a chance encounter; a colleague of a art director at one of the POD sites I sell on (Juniqe) came up to me and said hello. A small world indeed!

So second day ended with some more rain, and a tired body, but not before a final night cap to finish it off completely. So the third and final day started, with, yes you guessed it; rain! After being told so much that this country was so much more sunny than Greece and then being able to enjoy breakfast with the fab company watching the rain come down, was something else! None the less, work to be done and a short amount of time to complete the caricature. My plan was to showed highlighted sections of the process as, though it takes me 5 hours to make a caricature, I assumed it would be slower with the students. So I engaged them into doing a good eye, nose area and a section of the hair. This was with plans to get the artwork complete and sent to me to revue, after my return.

Everything went well, apart from a delayed intermission to get some chaloumi cheese tasting in before I left. I had a literal deadline, as the plane was leaving some 2 hours after the expected workshop end. I believe all in all we achieved a great deal of work in a short amount of time. And the students seemed genuinely happy with the event and what they had learnt. So much so, they have invited me back next year to do a part two and to even host an exhibition.

So, as a final note I would love to thank both Aggeliki and Miltos for their fantastic invite. It’s hard to express how much these two people overwhelm you with their kindness, friendship and hospitality, unless you experience it first hand, but I fear to do them injustice if I simply say they are great people! They were always happy and with a smile on their faces, always willing to run around and help, and make sure you (the speaker) were happy! Even with a ginormous veggie burger!!! I think if it wasn’t for them, and their attention to detailing my stay with such kindness and thought this wouldn’t have been such a fantastic experience.

The seminar was a great experience, and I managed to talk to several seniors who opened my eyes as well as confirmed many of my thoughts, as well as Charis Tsevis, who aired his reasons for quitting teaching (over lunch) and like mine their were identical. It gave me good ground to feel reassured in my decision. But all in all, I can only go to thank the fellow travellers and speakers in the even. They managed to assist and also make the “free” time more enjoyable and fun. Travelling to strange places can be lonely and daunting, but this trip was filled with so much fun and laughter that any in trepidation was gone! A fantastic experience and now a preemptor to next years even.

Thanks also to the wonderful Workshop class! Not only did they laugh at my terrible humour at the right point, but also managed to show genuine excitement and interest in learning these techniques.

Afraid of flying, who could thought that? 🙂

It’s not really the flying part I am afraid of. I am thinking it’s the dropping from 30,000ft if anything went wrong!! 😛

What was I thinking – a caricature nightmare?