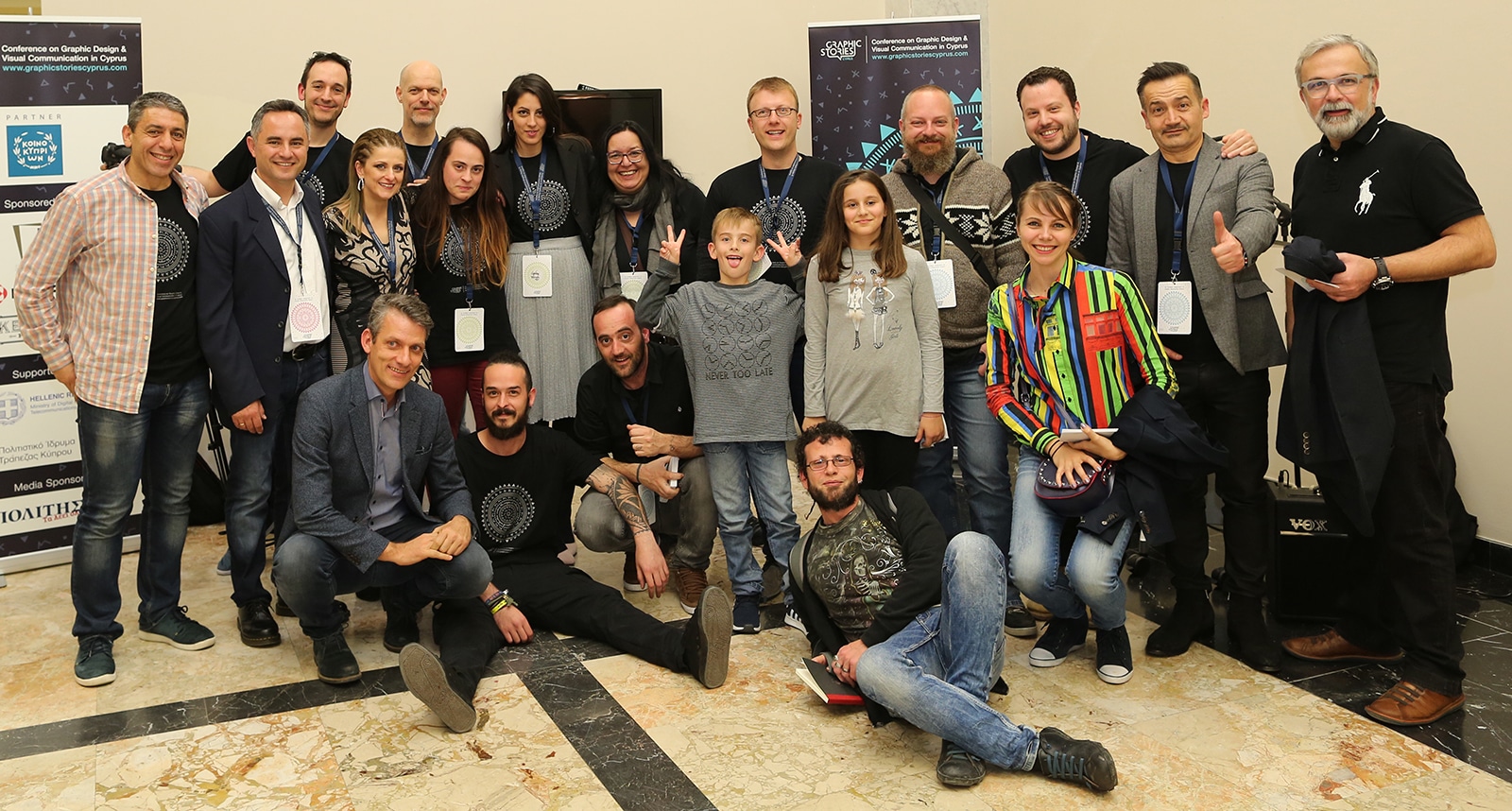 [vc_row][vc_column][vc_column_text]Seems like my fear of flying can’t stop me now. After my trip to Athens for the ΕΒΓΕ award committee for illustration in February, I was to fly off again to warmer climes, and the wonderful Cyprus again, for the next round of conference events in Graphic Stories Cyprus 2018.[/vc_column_text][vc_single_image image=”18713″ alignment=”center”][vc_column_text]Graphic Stories Cyprus (visit their site here) invited me in March 2017 to attend their yearly conference and workshop event, and whilst I was their plans were born to return the following year. That year had now arrived and plans were made to get organised. So the tickets were booked, plans were made. Everyone promised that the weather would be good there this year, so I had a delightful peace of mind! The only issue was the work load. I had arranged to do two conference speeches, a workshop for two day and an exhibition…let’s see what happened.

As, a busy illustrator I ended up having to do the Keynote presentation last minute again, but if anyone has attended any of my seminars they will know that I actually work for a capricious presentation, and only have some images to support the run of the theme. Nevertheless, I had to do something. Luckily, also (maybe from Boy Scout training) I like to prepare for the worst case scenario. I was told that Keynote was available this year on a Mac, but playing safe I decided to do a PDF version of the presentation.

So, bags packed, at airport and waiting for take off.[/vc_column_text][vc_single_image image=”18708″ alignment=”center”][vc_column_text]Not sure if I am doomed with airplanes or not, but once again here I was was (luckily in a window seat), waiting for a problem to arise. Low and behold, even though I booked Lacto-Vegetarian for my meal, I was not on the list! Luckily I was kindly reciprocated in the fact that everyone had to eat pasta in a cheese sauce, so issue one was resolved. As like last year I was to take the shuttle and meet Miltos at the terminus. On arrival, I called Miltos to say I had landed (which surprisingly was 40 mins early), and by a good spot of luck he was at the airport picking two other speakers up! So, I ditched the shuttle and hopped a lift with the guys.[/vc_column_text][vc_single_image image=”18711″ alignment=”center”][vc_column_text]After a brief stop at the art school; Agaia (who was hosting the workshop and my exhibition), we made it to Nicosia centre and the hotel of bad kerning (read last years review). Not really sure if anyone got my Orwellian remarks about the room number I was staying in with Nikos, but it was soon to be evident that there was some torturous moments ahead.

After a quick jolt into the centre for lunch and gathering of old friends, we stopped by the Bank of Cyprus to see the exhibition being installed for the Writing,the origins of Civilisation exhibition. It was now time to prepare for the tomorrow’s events and night saw the sleepless nights in my room 101![/vc_column_text][vc_column_text]

Friday morning this year was not a free affair, instead we had to bolt off to Agaia straight after breakfast for an exhibition set up programme. The school was situated in a very nice part of town with a great deal of μονοκατοικία (low rise houses). We were warned by Miltos that the process would be lengthy and to make sure everything was clean and mounted to the walls correctly. Both Lila and myself was surprised that we managed to get the whole 70+ images on the walls within a two hour slot. This gave us time to chill before the nights talks.[/vc_column_text][vc_single_image image=”18715″ alignment=”center”][vc_column_text]As I said previously, I had arranged to do two talks. It is typical to do the talks on the Friday even, when the crowds gather for the events opening and evening exhibition. I stated I could do a quick humorous introduction and mention of my main Keynote speech tomorrow evening.

I started the talk preparation some months ago, but as work piled up, I found I had left the completion to the last minute. The aim was to talk on the life of a graphic design via their biggest bane; clients. Little did I know that the speaker before; a French marketing expert, had a polar opinion about my own views on the subject. It was additionally funny I assumed that when I got up to talk that everything the lady had spoken of was countered by my working point of view. It managed to get a good reception, and the information was placed for my seminar on Saturday.[/vc_column_text][vc_single_image image=”18714″ alignment=”center”][vc_column_text]The workshops are a very important part of the conferences schedule. Getting young (and old) people into a classroom and showing them first hand on how to improve their artistic skills is vital for creative growth. Last year I did a workshop on the processes of doing one of my Celebrity Sunday caricatures. It went very well, and even though the time frame didn’t enable a completion, several of the students did complete in their own time and returned. During the workshop I stated that if I came the following year I could expand on the theme and do a full figure caricature, but of an animal. Everyone was thrilled to the idea, so I returned to do just that.[/vc_column_text][vc_single_image image=”18719″ alignment=”center”][vc_column_text]It was fortunate that the space used for the workshop was the same venue as my exhibition. I was surrounded by good examples of the points I wanted to make during the time I was teaching. The only thing that was missing was a theme. Luckily during a quick respite from the class and a trip to the tavern, I came across the idea to caricatures a Bassett hound; mainly as it has such nice folds of skin and was a good candidate to fit into the full body and caricature theme. So we began.[/vc_column_text][vc_single_image image=”18722″ alignment=”center”][vc_column_text]One small issue with doing workshops in remote places is that unless you lug your own equipment there and set it upas you like it, then the quick familiarising of the convenient set-up is hard. Luckily they found me a Mac to use this year, but it had the old mouse on it and no monitor, so I had an awkward time doing most of my work via the projector. Anyway, like the old adage says; “It’s a bad artist who blames his tools.” So I struggled on and made the best of the set-up and work through the challenge with some creative jest and ability.

Later in the first evening it was set up for me to do my Keynote speech and open my exhibition. Aggeliki and Miltos should be wary now that I am an exponent on the principle of stating a time for a talk and exceeding it two fold. Saturday night was no exception, as the seminar about “Selling Online and the Copyright Issues” was a two hour marathon of useful information and witty tales from the battlefield of counterfeit wars. It all went smoothly and the evening ended with a round up of the usual festive celebrations of the hosts birthday.[/vc_column_text][vc_single_image image=”18712″ alignment=”center”][vc_column_text]After the main day on Saturday, the days became easier, with just the workshop completion on Sunday, and a free Monday morning before we headed off to the airport.

Reflecting on my time, I found this trip to be a lot more enjoyable. The weather was better, the company was more familiar and the whole event was better prepared and organised. Cyprus is a small hop from Greece but is very close with it’s traditions and ways. I find the warmth and friendliness very inviting, and the whole time there is overwhelmingly enjoyable. I look forward to next year, if they want me back. Already have some ideas of what to do for a workshop. All that was left was to say good by to Cyprus, telling the hotel of their bad kerning, and the usual encounters at the Cypriot check in control guards and hop onto a plane to look out for Mount Athos on my right, to signify home.

A two hour flight is a long time when you think about this good time you had, and the friends you left behind and the new ones you created, and I hope to return, if only to finally get my Χυμό καρότο from Pizza Hut!!! Until next time, thank for the memories.[/vc_column_text][vc_single_image image=”18716″ alignment=”center”][vc_column_text]If you have interest in getting hold of a copy of the “Selling Online” PDF, you can get via the Newsletter which will hold the link; sign up here!![/vc_column_text][/vc_column][/vc_row]

With a little help from my ‘fans’!!