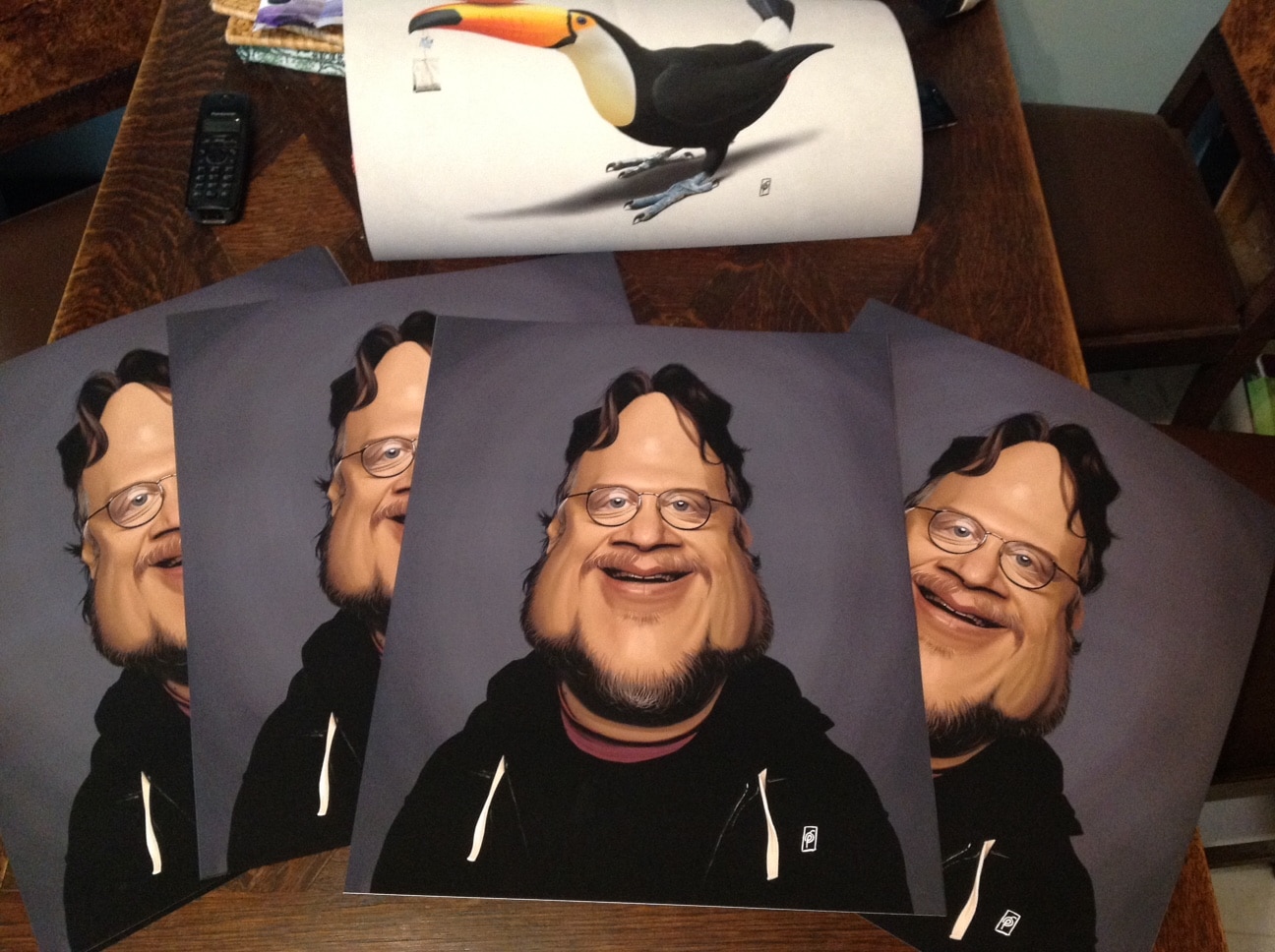 [vc_row][vc_column][vc_text_separator title=”The Beginning” subtitle=”How did I get into caricaturing?” style=”small” margin=”10″][vc_column_text]I have been drawing and illustrating now for around 20+ years and caricaturing had never been a thought in that time. In that time I have been asked on numerous occasions if I would do a caricature of someone. Almost all of the times I declined, as I felt I held a fear of doing a likeness of someone and not getting it right.

About three years ago, I made some decisions on my artworks. My Animal Behaviour series was taking too long, per image; in the region of 1-2 weeks per illustration. This is a considerably long time in regard to commercial aspects. The money required to cover the costs of that amount of time was more than people would be willing to pay for an image. So some action needed to be taken.

I looked at my process, and then also the processes of others to see if I could find a part of it that could be changed to get the processes sped up. It was evident that the part of the drawing that was most time consuming was the pencil rendering. I would sketch out a design, carbon it onto drawing paper and the pencil render to a fine level on the Bristol paper. This alone took, one week. So, I cut this part out of the equation. My first real attempt at this was a great success, which came in the form of “Lamb“.[/vc_column_text][vc_single_image image=”17449″ alignment=”center”][vc_column_text]So after finding that the process of sketching and direct painting in Photoshop was a lot quicker than the original process (seen above) then with practice I managed to get the rendering of the animal art down to three days (depending on the details required).

All I required was a very rough pencil render of the composition, and then this was scanned into Photoshop, where the reference art and details were added to build up the final composition.[/vc_column_text][vc_single_image image=”17452″ alignment=”center”][vc_column_text]Then the thought came into my mind about all those requests in the past about doing caricatures; the main motivation was two-fold. First, I wanted to look at a new technique using a new brush, and second was to test if it was possible to render out a complete image within a day.

So was born, Celebrity Sunday! The idea was to take famous person from a found image off the Internet and to render it out on a Sunday (my day off). The rules were simple. I would sketch the main image the evening before and then the following day I would attempt to render out a complete caricature as quick as possible, but within a day.

Luckily for me everything went (and has been) going well. For the first year I dedicated myself to doing it every Sunday without exception, until I had 53 caricatures. I am proud to say that none of the images were a failure. I managed to complete all of the caricatures from their starting point to end point. Some took 4 hours and some (like Bryan Cranston) took unto 10 hours. Nonetheless I persisted and found that the style and complexity actually improved over time, even though the time consumption didn’t.

One thing I have noticed in my many numerous designs of famous faces, is that I have not yet achieved any sports celebrities. So, at the end of this current year and entering series four this will be a part of the growing challenge (both vintage and current). I will also be including some of these images in an upcoming exhibition in Cyprus, as part of the Graphic Stories Cyprus events in March. So more news to come!![/vc_column_text][/vc_column][/vc_row]

Camaloon – the badge of quality!